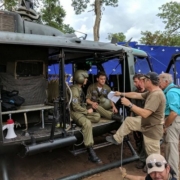 Though he lives in Los Angeles these days, film director and writer Todd Robinson has deep roots on the East End. Not only did he spend every summer and a lot of Christmases at the family home in Westhampton, but his roots go back to the 1600s, and his mother and sister still live on the East End.

“Long Island is always with me,” said Robinson in a recent phone interview. “My childhood was impacted by crabbing at the end of the dock with the smell of creek mud in my nose.”

On occasion, his films have even dealt with Long Island subjects. His 2006 movie, “Lonely Hearts,” which he wrote and directed, was based on the experiences of his grandfather Elmer Robinson, who was a Nassau County homicide detective in the 1940s and portrayed by John Travolta in the movie.

“My grandfather was born in Westhampton in a small house that’s still there. He had four brothers and sisters and they weathered the big ’38 storm in the basement,” Robinson said. “Legend has it, my great-grandfather went on the roof and saw the flood tide coming in and got them out of the basement. The hand of God wiped the earth clean.”

With stories like that hanging on his family tree, it’s probably no surprise that Robinson has returned to Long Island on more than one occasion in pursuit of a story for a film. In a way, that’s also the case with his newest film, “The Last Full Measure,” which tells the true story of William Pitsenbarger, a Vietnam-era U.S. Air Force Pararescueman who was killed in action in 1966.

Though Pitsenbarger hailed from Ohio, not New York, in some ways Robinson’s film about him was born locally. It all began back in the late 1990s when Robinson was approached by Wolfgang Petersen, director of “The Perfect Storm,” to write a screenplay based on Jack Brehm’s book “That Others May Live.” Brehm, you may recall, was one of the Pararescue Jumpers, or PJs, who played a harrowing role in the “The Perfect Storm,” and as a member of 106th Rescue Wing, was based at Gabreski Airport in Westhampton Beach where Robinson went to do some research for the script.

“They’re an elite group within the Air Force,” said Robinson of the PJs. “There’re only 600 of them currently and they are part of special operation teams usually embedded in various groups.”

It was at Gabreski that Robinson first heard about William Pitsenbarger and the heroic actions in Vietnam which ultimately cost him his life. As Robinson toured other bases around the country in pursuit of the Brehm story, it was really the Pitsenbarger story that kept coming up.

“Everywhere, airmen wanted me to know the story of Pitsenbarger,” said Robinson, adding that, in the end, the Jack Brehm film was never made, but the Pitsenbarger story stayed with him.

That story took place in Vietnam where Pitsenbarger, a member of the 38th Rescue Squadron, had taken part in more than 250 combat missions. On April 11, 1966 while on a rescue mission near Xi Cam My, just east of Saigon, Pitsenbarger dropped into battle where he helped a half dozen or so wounded men from the Army’s 1st Infantry Division escape. But when he was offered the chance to get out of the combat zone on the last helicopter, which was coming under heavy fire, Pitsenbarger instead chose to stay behind to tend to and defend the remaining soldiers on the ground. Pitsenbarger never made it out alive and was killed by sniper fire during the mission.

“It’s a story of ultimate valor,” Robinson explained. “In terms of what he did, Pitsenbarger descended into one of the bloodiest battles of Vietnam, knowing he wouldn’t come out of it. He refused to get in the helicopter multiple times and fought alongside men he didn’t even know.

“They only knew him for a couple hours, but his actions imprinted on them deeply. They’re all suffering with PTSD still, this effort sort of saved their souls by giving them purpose later.”

“The Last Full Measure,” which was shot in the U.S., Costa Rica and Thailand, is being distributed by Roadside Attractions and Lionsgate and is scheduled to open in wide release in January 2020. But this Saturday, October 19, the film will be shown free of charge for an audience of veterans at the Westhampton Beach Performing Arts Center where, coincidentally, Robinson’s mother, Ronice Robinson, is a volunteer.

In his film, Robinson tells the story of Pitsenbarger through the research efforts of a Pentagon investigator named Scott Huffman (played by Sebastian Stan). The character is based on the real-life Parker Hayes, who documented the accounts of the soldiers who had witnessed Pitsenbarger’s actions.

“A lot of dialogue came from his transcripts,” Robinson said. “The film starts out in the near present — it takes place in ‘99 — and Huffman interviews the guys and we transition back and forth to their memory of the events, each of them in Rashomon way.”

“There was enough of a historical through-line that was somewhat linear to put together the timeline of those 18 hours in Vietnam,” Robinson said. “Then we’re shaking it up and taking it out of time so it was not just a linear experience.”

In describing the types of films he prefers to make, Robinson said, “My lane is non-romantic love stories between men – the field of play or combat. ‘Lonely Hearts’ takes place in a police precinct. It’s usually men becoming initiated by going through radical life experience.”

In this story, he found that the passion and dedication of the veterans he interviewed who shared their memories of Pitsenbarger was so moving and compelling, that he knew he had the makings of a strong film script.

“This one I felt was so full of emotion that it was really an embarrassment of riches. The guys gave me that story,” he said.

In 2000, Pitsenbarger was finally awarded the Medal of Honor and Robinson notes this is a film that was 52 years in the making.

But now, after many fits and starts, “The Last Full Measure” is headed to the big screen backed by an impressive cast that includes Samuel L. Jackson, Christopher Plummer, William Hurt, Ed Harris, Diane Ladd and Amy Madigan, among others. Though it doesn’t open to the wider public until January, Robinson notes it has already been screened nearly three dozen times for military audiences and has received a very strong reception.

“It’s a pretty remarkable thing. People are truly stunned by the movie and the story,” he said. “This one touches everyone … It’s not a political movie at all. I want to persuade people to just think about who you are and your position in the world.”

“In the end, you see the legacy of what this guy did,” he added. “If he had been given the medal in ‘66 we wouldn’t even know about the story, but because so much time passed, you can see the children and grandchildren of the men he saved. This massive legacy is because one guy in a helicopter made a decision to do something.”

“The Last Full Measure” will be screened free of charge for all veterans on Saturday, October 19, at 7:30 p.m. at the Westhampton Beach Performing Arts Center, 76 Main Street. Tickets can be reserved by emailing [email protected] or calling the box office at 631-288-1500.