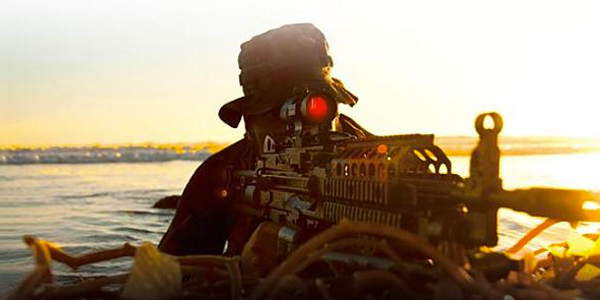 Mark Harmon has had a pretty good thing going over at CBS, thanks to headlining NCIS and acting as an executive producer on both NCIS and NCIS: New Orleans. Now, the actor and producer wants to get further in bed with the eye network. On Tuesday, we learned Harmon is working with CBS to bring a Navy SEAL sniper drama to the air. The project is called The Red Circle.

So far, CBS has only signed on for a script commitment for The Red Circle, but we do know a little bit about the project. First and foremost, it is based on the New York Times bestseller The Red Circle: My Life In The Navy SEAL Corps And How I Trained America’s Deadliest Marksmen written by Brandon Webb and John David Mann. The book follows the true-to-life experience of Brandon Webb, a marksman who has both worked in the field for a SEAL team, as well as acted as the Course Manager for the Navy SEAL Sniper Program. The program will take a look at some of the “difficult” and “demanding” actions military members must take as a Navy SEAL.

THR says that Harmon will executive produce the project and Webb is actually on board to produce. Todd Robinson, who has written Lonely Hearts and Night and Day, is writing the script for CBS Television. Altogether, it’s a pretty solid lineup of talent.

The project comes a year after American Sniper made a big impact, both critically and financially. Clearly, the Clint Eastwood film was a big box office hit, and since CBS is always on the lookout for the type of project that will appeal to the masses, The Red Circle seems as if it could be a good fit, especially since the military is typically a good sell with older audiences. With Mark Harmon on board and CBS likely willing to shell out for talent as well, the final product will have every chance to succeed.

At this point in the development stage, however, it’s really too early to start getting excited. Even the projects with the best talent don’t always come together for whatever reason. There are just so many moving parts that all need to work for it to move forward, including getting a good script, the right budget, a pilot order and a competent pilot. Not to mention the right actors need to be cast. Basically, it’s an uphill battle, but if there’s anyone who is a good bet right now at CBS, it’s Mark Harmon.

Whatever ends up happening, we’ll keep you updated. In the meantime, you can take a look at what else CBS has coming up this fall.