EXCLUSIVE: Strong Studios will develop and produce a feature based on the biographical novel 4th & Goal: One Man’s Quest to Recapture His Dream, examining the life of corporate executive, author and football coach Joe Moglia. 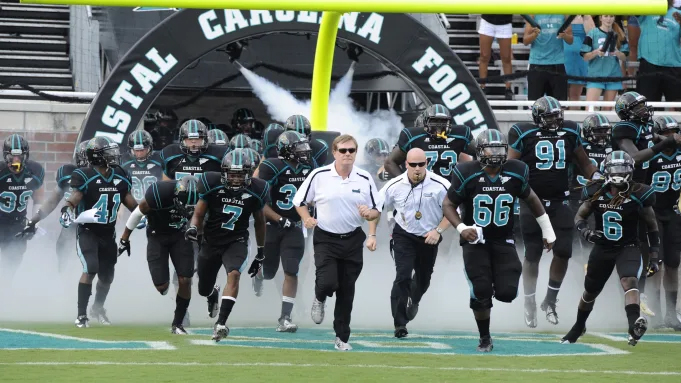 The 2012 book penned by New York Times bestselling author and Forbes contributing editor Monte Burke follows Moglia from his roots growing up in a rough-and-tumble neighborhood in New York City to his rise through the high school and college football ranks to become the defensive coordinator at Dartmouth, and his dream of becoming a head coach of a college football team.

Often, life has a way of interfering with dreams, and with a family on the way, Joe was at one time forced to abandon his, entering corporate America to make ends meet. With no MBA but through a fundamental belief that he could succeed with grit and determination, he landed a job at Merrill Lynch and 25 years later stood at the zenith of the financial world as CEO of TD Ameritrade, one of the country’s most successful financial firms. Then in 2008, Joe stunned the corporate world and voluntarily walked away from his lucrative job to pursue the dream he had abandoned… becoming a college football head coach at South Carolina’s Coastal Carolina University and ultimately, an eight-time Hall of Fame inductee.

“The story of Joe Moglia’s life is a singularly inspirational tale reminding us that with enough grit, determination, and sacrifice, the American Dream is within reach and that anything is possible,” said Kyle Cerminara, who also serves as Co-Founder of Fundamental Global. “I’ve been tremendously lucky to count Joe as a friend and colleague through our decadelong partnership with Fundamental Global, and the energy exuded from my meetings with Joe is a feeling I’m incredibly excited to share with audiences as they leave theaters empowered to bet on themselves.”

Continued Cerminara: “Little could be more deeply personal or make me more proud than to further collaborate with Joe to help bring to theaters Monte Burke’s beautiful account of Joe’s meteoric rise to mountaintops of both finance and football. I can’t wait for the premiere.”

“I am extremely grateful for the family, friends and colleagues that have played an integral role in my journey. Even with all of the twists and turns along the way, I wouldn’t change anything,” commented Moglia. “I look forward to working with Kyle Cerminara and the Strong Studios team to create a special movie that will hopefully inspire people of all ages to never give up on their dreams but to understand that sometimes it takes time…a lot of time and patience.”

“4th & Goal is a powerful tale of one man’s drive and determination to see a lifelong dream realized,” remarked Ozer, “and I look forward to working with Joe, Todd Robinson and our production team to ensure that we stay true to Joe’s story and deliver a compelling and inspiring tale of recapturing a dream.”

“I’ve known Joe Moglia for a long, long time, and I’ve admired his many achievements in both business and on the football field. It wasn’t until last year at a player’s reunion, however, that I realized just how deeply his wisdom and mentorship had impacted generations of young men,” said Robinson in closing. “His tough-love commitment and sacrifice to shaping lives are both rare and powerful and certainly worthy of celebrating on screen.”

Robinson won an Emmy for his 1994 documentary The Legend of Billy the Kid, and most recently wrote and directed the war pic The Last Full Measure, with Sebastian Stan, Alison Sudol and more.

Strong Studios is a subsidiary of Ballantyne Strong, Inc.’s Strong Entertainment, which develops and produces original features and television series, while acquiring third-party rights to content for global multi-platform distribution. The new studio launched in March 2022 with an IP development slate acquisition and an initial distribution agreement with Chicken Soup for the Soul Entertainment’s Screen Media for two new scripted series—the supernatural horror Safehaven, and the dramedy Flagrant with Michael Rapaport, which have both been officially greenlighted for production this year. Screen Media will distribute both series, with their streaming services Crackle, Popcornflix, and Chicken Soup for the Soul having first rights to premiere. Additional series in Strong Studios’ development and production pipeline include Shadows in the Vineyard, starring Judith Light and Noah Wyle; the drama Heartbeat, co-created by DJ couple Kiss and M.O.S.; and the horror MidNightMares.

Robinson is repped by A3 Artists Agency, Signature Ltd. and Goodman, Genow, Schenkman; Moglia and Burke by Richard Pine at InkWell Management; and Strong Studios by attorney Gary Sommerstein.