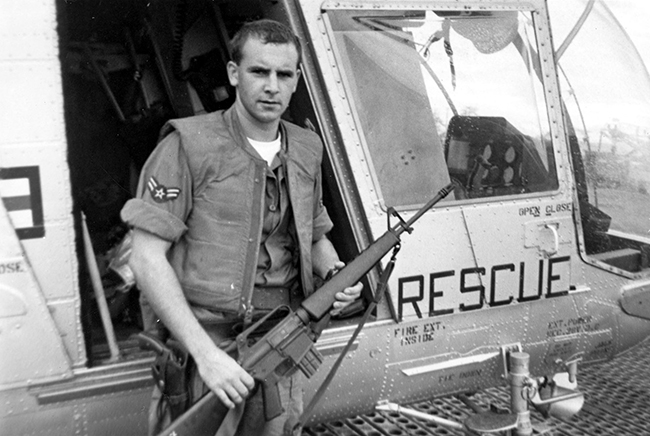 Memorial Day is a time to remember all those who died fighting for their country, just like A1C William Pitsenbarger, an Air Force pararescueman who took part in more than 250 rescue missions before he was killed at the age of 21. His selflessness and valor in the Vietnam War earned him an Air Force Cross and, eventually, a Medal of Honor.


On April 11, 1966, a US Army rifle company was isolated in the Vietnamese jungle, where they were surrounded and attacked by Viet Cong troops. Two HH-43F Huskie helicopters were dispatched to fly in, land a few miles away, and help get the men out. Pitsenbarger was on the second helo.


After a few bumpy extractions, Pitsenbarger requested the pilot leave him on the ground to ensure the men were properly rigged and loaded onto the aircraft so the evacuation process could be safer and faster, and so that more soldiers could fit on the helicopter.


But after the HH-43 was attacked by enemy fire and his crewmates tried to extract him, Pitsenbarger declined the rescue so he could continue his work on the ground. He alternated between doing that, arming soldiers with ammunition, and returning fire against the VC himself. He was killed by enemy fire that night.


Pitsenbarger was posthumously awarded the Air Force Cross in 1966, making him the first enlisted airman to receive the nation’s second highest honor for valor in combat, but his fellow PJs and those he fought alongside in Vietnam never gave up hope that his medal would one day be upgraded.


Finally, on Dec. 8, 2000—34 years after his death—the Medal of Honor was presented posthumously to Pitsenbarger in a ceremony at the Air Force Museum in Dayton, Ohio. Then-Air Force Secretary, and current AFA Chairman of the Board, Whitten Peters presented the award, which was accepted by William F. Pitsenbarger on his son’s behalf.


“What impressed me was the fact that there were a group of Air Force and Army people together who had been trying to get a Medal of Honor for this man for about 30 years at the time that they came to see me, and I thought anybody who has been honored by people trying to get the Medal of Honor for 30 years must be really something,” Peters told writer and director Todd Robinson in a video interview.


Pitsenbarger’s sacrifice—and those veterans’ fight to honor it—has now inspired a feature film, “The Last Full Measure,” written and directed by Robinson. The movie, which is based on the quest to secure the posthumous honor for Pitsenbarger, plays out “through the story of a young bureaucrat who was tasked with the job of reinvestigating” Pitsenbarger’s story, and who, through the process of interviewing veterans as part of the assignment, is “transformed as a man of total self interest to a man of total sacrifice,” Robinson explained in a May 23 interview with Air Force Magazine.


“And that is the mythology of the William Pitsenbarger story because he was a man who was altruistic and selfless and he went down into a battle he did not have to go into,” Robinson said. “He put his life at risk and then rejected the opportunity to escape and to hear one of our veterans describe it, everybody who was on the ground would’ve left if they could, but they couldn’t, and the one guy who could leave, stayed.”


The film boasts an all-star cast, including Marvel’s Sebastian Stan, Samuel L. Jackson, and Ed Harris, among others, with Jeremy Irvine playing Pitsenbarger. It’s slated to be released January 17th, 2020 by Roadside Attractions, a subsidiary of Lionsgate.


A special private screening of the film is being held on May 28 in Washington, D.C., for active duty service members and retired veterans. Interested individuals should email the film’s executive producer, Sidney Sherman, at[email protected] for more information.